Board Members McCall and Valdes Sworn Into Office 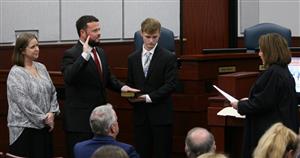 In 2001, Wes married his wife Jakima, at St. David’s Episcopal Church in Roswell, GA. A year later, they purchased their first home in Forsyth County. Soon after, they had their only son, Ian, who currently attends Forsyth County Schools.

Ian’s kindergarten year began Wes’s involvement with the Forsyth County Schools. Starting with reading each week to the class and volunteering for Math groups, to becoming a mentor, to spear heading the Science Lab at Sawnee Elementary, Wes was very involved at the school. This came to also include several years on the PTA Board and serving on the Local School Council for two schools.

Wes’s involvement with student development has spanned many different avenues to include: church youth group, founder of the Emerging Leaders Program (ELP) through North Fulton Leadership, working with the Georgia Department of Education to develop career path curriculum for the public safety industry, Boy Scout Leader, and he has served on several educational boards.

Wes holds an undergraduate degree from Grand Canyon University in Christian Leadership and a graduate degree from Columbus State in Public Administration. Most weekends he spends time with his family watching his son play lacrosse, and every now and then squeezes in a round of golf. Wes and his family attend Browns Bridge Church. 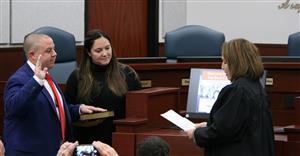 Mike is a resident of Forsyth County and the father of 3 amazing Forsyth County Schools students in the Denmark cluster. In 2012, Mike and his wife of 17 years, Florencia, relocated to Georgia from their native Miami, FL and ultimately put down roots in beautiful South Forsyth because of our premiere school system, vibrant diversity, robust economy, and excellent Sheriff’s Office.

Mike and Florencia met almost 20 years ago at Alpha and Omega Church in Miami, FL where they attended Bible college and served as leaders and deacons in Youth Ministry, with a specific emphasis on troubled youth, substance abuse, and gang outreach ministries. For more than a decade, Mike had the humbling and rewarding opportunity to serve some of the neediest families and young people in the city. This experience changed his life forever and affirmed his commitment to the next generation.

Mike has always been a strong proponent of Public Education, himself a product of public schools, including as the first college graduate in his family. Over the years, Mike has served on numerous PTO, local school councils, volunteer task forces, and volunteered as a coach for recreational leagues. Mike is passionate about the Fine Arts, being a lifelong musician and having performed in Orchestras and Marching Bands. He is also passionate about STEM and Business Leadership. In Forsyth County, Mike participated as part of the community task forces developing our current strategic plan and has been very involved in community groups advocating for education.

Mike is a 22-year veteran of the Heavy Civil Engineering and Construction Management field where he specializes in the design and construction of major civil infrastructure projects. He has managed publicly funded projects of all sizes, including large, complex, multi-discipline teams of engineers and construction specialists, with individual budgets of around $500 million. He holds degrees from Miami Dade College and Florida International University in Civil Engineering and Construction Management and has dedicated his entire career to the design and construction of public works projects. Mike is credentialed by the Design-Build Institute of America as a Designated Design-Build Professional and has held licenses as a General Building Contractor and General Engineering Contractor.